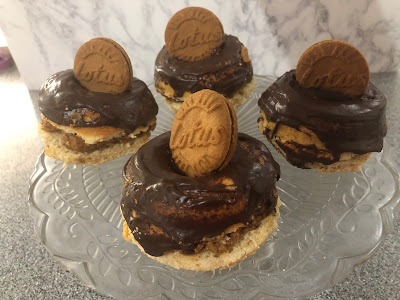 I used to take part in a blog challenge called Food ‘n’ Flix where the person hosting each month chooses a movie and everyone taking part bakes something inspired by that film. It got me to watch quite a few films I otherwise would never have seen and to try a few recipes I almost certainly wouldn’t have made otherwise!

As I’ve been baking and blogging less it fell off my radar a bit for the past couple of years but I came across it again last month. Wendy from A Day In the Life on theFarm chose the film Knives Out, which had been on my 'to watch' list for a little while, so it was a good reason to bump it to the top!

I wasn't sure what to expect from the film, which stars Daniel Craig as a detective trying to solve the mystery of a family patriarch's death. His family members all seem to have secrets and possible motives for their involvement in what may or may not be a murder, though the police have ruled it a suicide. There is an all-star cast including Jamie Lee Curtis, Toni Collette, Don Johnson, Chris Evans and Christopher Plummer, and the film reminds me of an Agatha Christie-style 'whodunnit' - but at the same time it's also very funny. I really enjoyed watching the film as it made a nice change from the sort of things we usually watch.

In terms of food references and inspiration, there's a lot of indirect inspiration that could be taken from the family setting, but I prefer with this challenge to use a direct reference. There's one scene set in a restaurant where one of the main characters eats sausage and beans - a dish my husband would enjoy but I hate beans so this wasn't one for me. What actually stuck in my mind more was doughnuts!

There's a scene where Daniel Craig's detective Benoit Blanc summarises how confusing the case appears to be, saying: "A doughnut hole in the doughnut's hole. But we must look a little closer. And when we do, we see that the doughnut hole has a hole in its center - it is not a doughnut hole at all but a smaller doughnut with its own hole, and our doughnut is not whole at all!"

After that, all I wanted was a doughnut, so that's what I decided to make! I've never tried to make proper doughnuts as they need to be fried - I don't have a deep-fat fryer and don't really fancy filling a pan with that much oil. Instead, I've made baked doughnuts a few times and have the Wilton doughnut pan which makes these really easy.

I used this recipe for the doughnuts from the Wilton website. 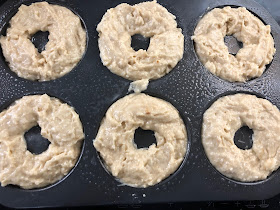 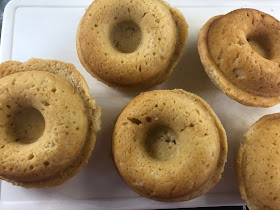 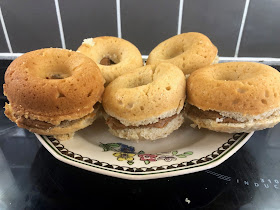 When it came to decorating them, I was missing Doughnut Time (yes I know they deliver but I don't think it's a good idea for my husband and I to have a box of six of their doughnuts between us!) but I still wanted to do some sort of indulgent filling and topping. Lotus Biscoff immediately sprang to mind, since as well as the biscuits, they make a spread which I could eat just from the jar! I used some of the spread to fill the doughnuts (which I sliced through the middle - I wasn't quite up to injecting the filling like shop-bought ones!) and then covered the top in a chocolate glaze which I made from a mixture of chocolate and butter.

I poured the chocolate glaze over the top and topped with a Lotus Biscoff chocolate biscuit. These weren't as gooey or indeed a patch on the ones I've had from Doughnut Time but they were very good and didn't last long! 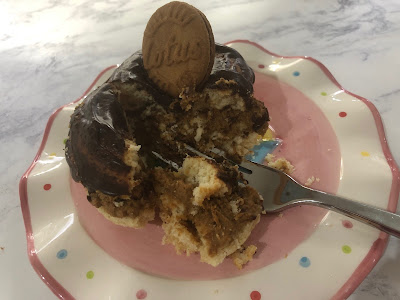 I'm sharing this with A Day in the Life on the Farm for November's Food 'n' Flix challenge.