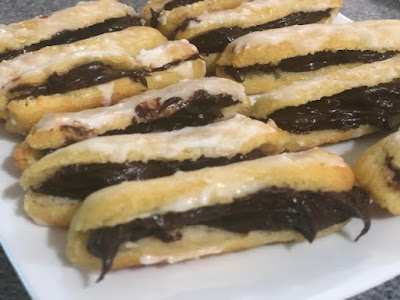 I’ve been trying to bake along with Great British Bake Off this year and wasn’t particularly looking forward to pastry week as I don’t make particularly good pastry - I’m rubbish at kneading I think! Until I saw that the bakers were making choux pastry and specifically eclairs. Given I have an eclair pan and a book called Secrets of Eclairs - both from the pre-parenting days when I had a lot more time to bake - I had no excuse not to join in!

Eclair pans are not exactly a necessary piece of baking equipment but they do help keep your piping straight and a uniform size and the tin I used is quite heavy with curved edges which keep it stable.

As for the recipe book, it’s a small volume but has some detailed explanations of the equipment and techniques you need to make eclairs, plus recipes for different flavoured pastries and fillings.

I was quite limited by what I had in the house - if I want to bake in the same week as the GBBO episode then I need to either decide before I’ve seen the show what I am going to make (so not really a bake along) or make do with what I have got in the house - I’m trying to avoid extra trips to the shops due to Covid!

That left me with plain eclairs with a chocolate filling and white icing on top - nice and traditional. 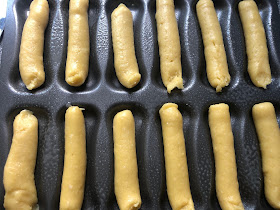 Making choux pastry is actually quite straightforward and quick but the tricky bit comes with deciding how much egg to add. The recipe I used said you needed up to two eggs, and to beat them together and add gradually until you get the right consistency. I felt I needed to use all the egg, so wasn’t sure if that was right and I should have used less, but it turned out well!

I did end up having to make two batches and in true GBBO style, bin the first lot and start again. Bizarrely for such a detailed recipe book with extensive explanations of each step, the basic recipe for choux pastry at the front of the book omits any cooking time! So I went by the time in one of the flavoured recipes later in the book and the eclairs came out very overbaked so I started again and reduced the cooking time significantly. 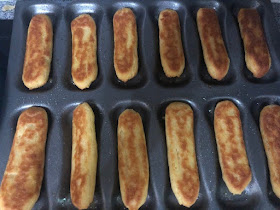 I made simple icing from icing sugar and water which looked ok at first but once it had set it was almost transparent and I think I should have made it much thicker or done a few layers. I would have preferred to make the traditional chocolate icing but didn’t have the ingredients as this was a last minute bake! The texture of the choux was quite good and they did taste nice, though they were a lot smaller than shop-bought eclairs. This was the size guided by my eclair pan so I can only assume that shop-bought eclairs use some sort of industrial equipment and bake in a size that can't really be replicated at home. If that's not the case and you are a whizz with eclairs, let me know in the comments below! 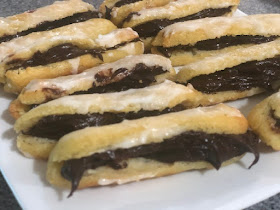