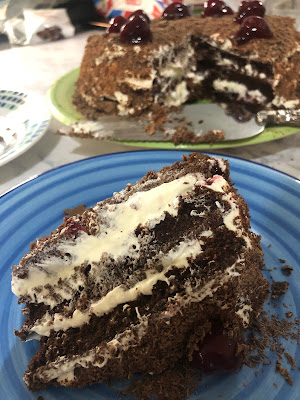 It was the time of Kylie and Jason and Bros, drop-waist dresses with puff ball sleeves, Butlins holidays, Queen and Vanilla Ice, My Little Pony and Care Bears, candy necklaces and fizzy cola bottles, and what felt like endless summers running around outside with friends from your estate, running home just in time to watch 80 Days Around the World with Willy Fog or to beg mum for a coin p as you heard the ice cream van music playing.

In other words, I was a child of the 80s and so was really looking forward to Great British Bake Off’s 80s themed week. I wondered beforehand what they could be asked to make - these are the foods I most remember!

The list goes on.... if you remember the 80s, what were your favourites?

The actual challenges in GBBO were quiche, custard doughnuts and ice cream cake. I didn’t realise quiche was an 80s trend, though I do remember seeing one for the first time in the local bakery when I was a child and reading the label, getting the pronunciation wrong as I’d never seen the word before and asking my mum what a ‘quickie’ was, to her mortification! Though as someone with a modern languages degree I’m quite impressed that eight or nine-year old me read ‘quiche’ as ‘quickie’!

I didn’t think those kind of doughnuts were particularly associated with the 80s either, and other than Viennetta I don’t think I ever saw an ice cream cake in the 80s - and Viennetta isn’t really cake, it’s ice cream and thin layers of chocolate.

So when it came to my own bakealong I decided to make something different. I have strong memories of going to a couple of aunts’ weddings in the 80s and Black Forest gateau featuring prominently on the buffet table. I absolutely loved Black Forest gateau apart from one thing - I didn’t like cherries. But the cake was so moist, so chocolatey, I couldn’t resist - so I would always have a slice if it was on offer and carefully prise apart the layers and scrape the cherry filling out, then scrape the cherry off the top, then deposit both on my mum’s plate and wipe my fork with her napkin!

I still don’t like cherries and haven’t eaten Black Forest gateau for years - and have never made one, so it seemed a good idea to make for my GBBO bake along!

I used this Eric Lanlard recipe but didn’t use kirsch as I wanted my daughter to be able to eat the cake; instead I brushed the cake layers with cherry juice. I also didn’t want to use black cherries so bought a tin of black cherry pie filling, which did contain whole cherries but also a thick syrup that I used to sandwich between the layers of the cake. I saved the actual cherries to decorate the top of the cake - and of course picked them off when I came to eat it! 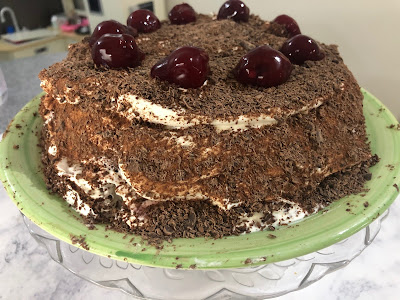 I think I might have forgotten to add the sugar to the cream and I didn’t think I could actually taste any cherry in the cake either from the juice or the filling! Which essentially made it quite a lot of faff for a chocolate cake with a fresh cream filling. But the grated chocolate around the outside and the cherries on top made it feel very 1980s! So I was fairly happy with this cake but if I made it again I might just use the cake recipe and skip the cherries entirely and fill it with chocolate instead!