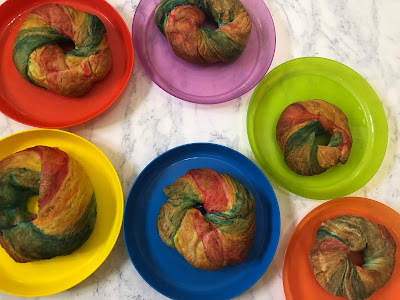 The Great British Bake Off put rainbow bagels in the spotlight in bread week and there was some controversy after Paul Hollywood suggested they represent the NHS. In fact these brightly coloured bagels - which are just regular bagels with food colouring - originated in New York and there were queues down the street outside creator Scott Rossillo’s Bagel Store when they hit the big time (i.e. Instagram) in 2016. Later they moved to London’s Brick Lane, which if you have been there you will know is bagel-central. But do they have anything to do with the NHS? Well no - they are more commonly seen as a symbol of Gay Pride and the LGBT+ community.

Either way, my two year old daughter loves all things rainbow and thought these were brilliant!

Since they featured as the technical challenge in GBBO there is a recipe on the website. This is the one I followed and I found them quite easy to make - or so I thought because they didn’t exactly turn out perfectly but they tasted pretty good! 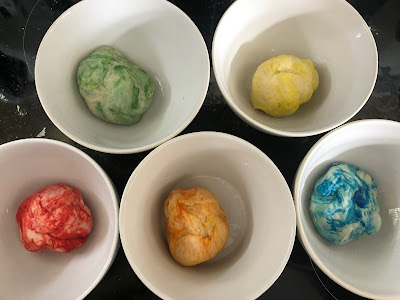 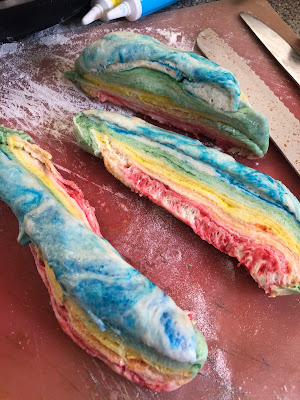 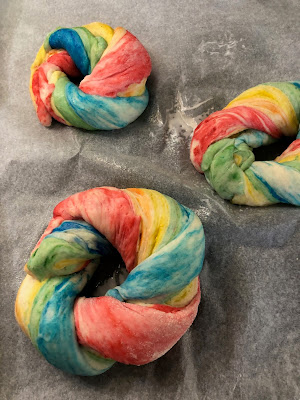 They are more time consuming than difficult as you have to add food colouring to five separate pieces of the dough and knead it in. Layering and twisting each piece was good fun and I thought they looked great even if mine weren’t as neon bright as the ones on the TV.

Did you know that you briefly plunge bagels into a pan of boiling water before baking them in the oven? This is what gives the bread it’s shiny outer crust but makes sure they stay chewy in the middle. I actually made these before watching the relevant GBBO episode and it was onto when I watched it the next day that I heard the judges explain that if the bagels spend too long in the water they get a wrinkled effect instead of a hard shiny crust, which is what mine had - the wrinkles that is! 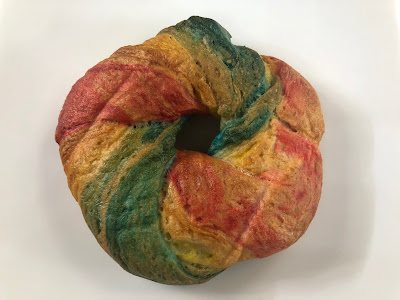 Apparently the water needs to be simmering not boiling. I also don’t think I kneaded the dough enough (for some reason I decided to do it by hand rather than using my Kitchenaid) and I also left the bagels too long to prove as I was making these in stages around doing other things! So in a way it was actually surprising that they turned out so well! Here is a picture of the inside: 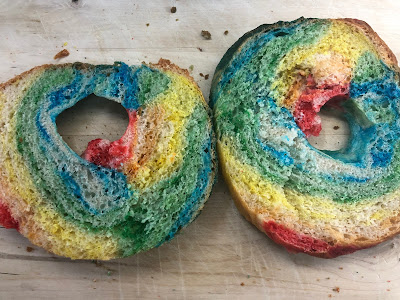 If you are baking along with GBBO and have made these or fancy having a go, let me know!