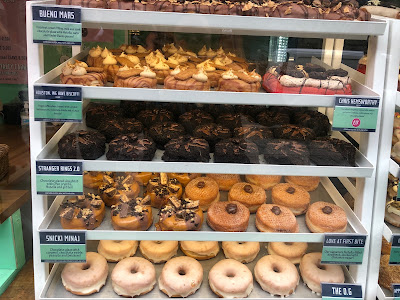 Something about lockdown has made me start thinking about doughnuts a lot. You just can’t get them with your online grocery order – which is making me want them even more. For some reason, the fresh bakery items like a fresh unsliced loaf of bread or a simple doughnut doesn’t seem to be an option. I’ve even been browsing websites like Krispy Kreme and Doughnut Time to see what they can deliver, then deciding I shouldn’t be bulk buying that sort of thing at the moment anyway!

But it reminded me of when I started my new job and found a doughnut shop called Doughnut Time.

It’s right up there with the super-indulgent once in a blue moon treat – they look so calorific and are also pretty expensive, as far as doughnuts go - £4.50 each when you can get a pack of five for under a quid from supermarkets. But these are not your average supermarket doughnut, and indeed they are (in my opinion) a cut above Krispy Kreme, which until now I thought was the gold standard of doughnuts (mass produced ones, anyway).

Doughnut Time’s doughnuts are big – and I mean massive. They even sell a sharing size one for £17 that would be a good alternative for a birthday cake – but I think their regular sized ones would easily do two people.

The doughnuts themselves are light and springy with just the right amount of chewiness – really good. But it’s the toppings where they come into their own, complete with quirky puns for names. 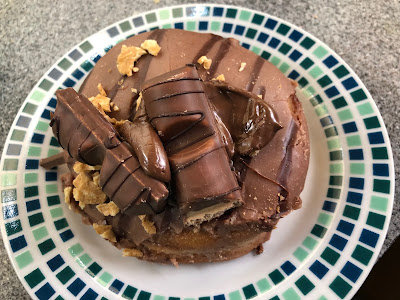 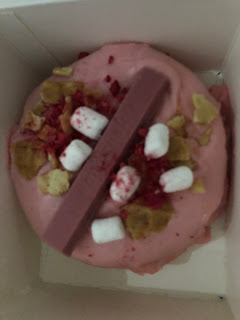 The shop window literally stops passers-by in their tracks and inside the shop is basically just a tiny counter with space for about two people to pay and take the doughnuts away (they provide boxes). (NB – I haven’t been here since before COVID; they have about a dozen stores that are open around London at the moment and they advise you follow them on Instagram to find out which stores are currently open).

I’ve actually been here three times now, and have tried the Ruby Rose and the Bueno Mars – both amazing but the former seems lighter due to the cheesecake and the flavour, which is a good thing, and my husband has had the Stranger Rings 2.0 and Ice Ice Bae Bae – vanilla buttercream, vegan cookie pieces, chocolate chip cookie dough and chocolate chips. I didn’t even bother telling him this one was vegan as I knew he’d love the cookie dough! We also had their Valentine's special - I can't remember what it was called but it wasn't as good as the Bruno Mars!

Did I mention that they do a DIY kit to decorate your doughnut at home – the doughnuts are of course provided. I may have to treat myself soon….