Too Good To Go: How to reduce food waste and get cheap meals

How can you get cheap restaurant food and bargain bakery deals?

Many of us like a bargain and in these strange times a lot of people are struggling financially. It’s a well known supermarket shopping tactic to go at the end of the day when they are reducing their items that are close to use by dates - known as ‘yellow stickering’. But did you know that there is - in the UK at least - another way to get reduced food not just from shops but also from cafes and restaurants?

A while back a colleague told me about an app called Too Good To Go. The idea is to help shops and dining establishments to reduce food waste - and help customers save money at the same time. You can buy a ‘magic bag’ for a couple of quid - usually between £3 and £4 - with the items inside worth at least £10, often a fair bit more. The only thing is - you don’t know what you will get, as these are mystery bags! They all contain food that needs using quickly and might be at its best before date already but still safe to eat.

How does the Too Good to Go app work?

You can set the app to your local area - eg near home or work - and each day see where there are bargains to be had. But you have to be quick! Each offer goes live at a certain time - which varies according to the shop and I’m not sure it’s the same every time even then. I haven’t been able to figure out a way of discovering when is the best time to secure one of the magic bags - though if you are interested in a particular shop or restaurant, keep an eye on the app as it will tell you what time the bags sold out each time, and you can use that to get an idea of when they might have been released.

at a certain time and this can be a little tricky - for instance a cafe might want to sell what is left over from their lunch rush but you need to collect it between 2 and 2.45pm. Or a restaurant will ask you to collect between 9 and 9.30pm. But what’s ok to eat at 9.30pm should still be ok to eat the next day and don’t forget some things can be frozen - so in my opinion it’s definitely worth doing.

As the contents are a surprise you can’t factor in allergies but Too Good To Go says that if you pay for and collect a bag and find it has something inside you are allergic to, to get in touch with them. If you have certain dietary requirements like you are vegetarian, you can filter your search.

I’ve never been able to take advantage of the app before due to the timings and my commute but now that I’m working from home, suddenly it is accessible. There aren’t any restaurants in my local area taking part - the nearest being a ‘chicken hut’ 3km away where I would have to go at 10.30pm. There is a nice sounding Italian deli a similar distance with collection at lunchtime so one day if I don’t have meetings I might see if I can fit it into my lunch break!

But happily the local garden centre five minutes away takes part in the scheme so one day last week I managed to go into the app at the right time while there were still some bags available, and snagged myself one.

What I hadn’t realised was that the delivery time stated was for the next day, but that was fine and I could still manage to go. You pay via the app or by card and it tells you where to go in store - in this case it was the deli counter where they had the bags ready and waiting, I held my phone out for the app to be scanned and was handed the bag and that was it - in and out in five minutes.

What do you get in the Too Good to Go bag? 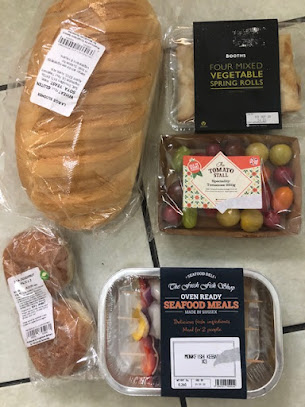 I couldn’t wait to look in the bag when I was home and see what I’d got! My haul consisted of: a large bloomer loaf (which stayed fresh for a few days), a packet of mixed heritage tomatoes which still had several days to go, a packet of two jam doughnuts (which for eaten the same night), a packet of four vegetable spring rolls and a fresh ready meal of monkfish kebabs (to serve two), both of which had use by dates that same day and I had already defrosted something for dinner so they went straight in the freezer. They looked very tasty and a premium item - I think the whole bag was probably worth around £12-£15 and I paid £3.99 for it.

Last month Too Good To Go saved more than 100,000 meals from going to waste. I have also seen internet articles about people getting £30 worth of food from their local supermarket for just over £3 on this app, which is especially good for those finding money a bit tighter than usual at the moment. For me personally, the magic bag was more of a treat (I must say I had been expecting more bakery items, ie cake!) at a bargain price and not something I would have the time to do regularly - but I really like the surprise element as I wouldn’t have thought to buy monkfish kebabs.

If you live (or work) in a big city you are more likely to find places taking part in Too Good To Go, and it seems like the range is growing all the time - so it’s definitely worth taking a look. Let me know if you’ve used it before and what was the best thing you got in your magic bag!