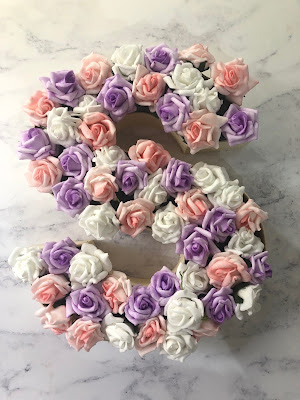 My daughter is now two and a half and during lockdown we decided to redecorate her bedroom. She has a lovely mural on one wall (a giant decal sticker) and a bookcase full of books but other than that we hadn’t much much effort in, as she doesn’t really play in her bedroom yet apart from a few minutes after going up to bed. We decided it was about time we made the room nicer and somewhere she might want to play, plus she needed more toy storage as she has so many toys!

I had been browsing photos of girls’ bedroom styles on Pinterest etc for inspiration and decided to put up a couple of shelves with pretty decorative items on them. I’d seen a few things I liked, in particular the child’s initial either in a picture frame or three dimensional and covered with flowers. It looked easy to make so I thought I’d have a go, and got everything I needed from Hobbycraft.

They sell wooden fillable letters (£4.40 each) many of which seemed to be out of stock online so I signed up to be emailed when they were back in stock. The first time I had such an email the letter I wanted was already sold out again by the time I went online so second time I was ready and made my purchase while I was getting up in the morning!

The flowers are fabric wired rose heads, I used three packs at £3 each - each pack is one colour. I used most of the packs to fill the letter and only had a couple of flowers left over. I cut and shaped pieces of florist oasis to put into the wooden letter and stick the flowers into, alternating colours and making sure there was no gap. 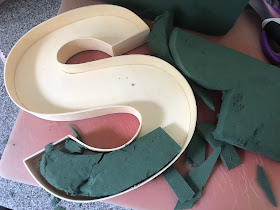 The oasis seemed firmly in place so I didn’t glue it in as I had intended but this would make it more secure. Hobbycraft also sells a small wooden stand (50p) which will help if you want the letter to stand up on a shelf.

I’m really pleased with how this turned out and how simple it was to make - once everything turned up from Hobbycraft it took about ten minutes!