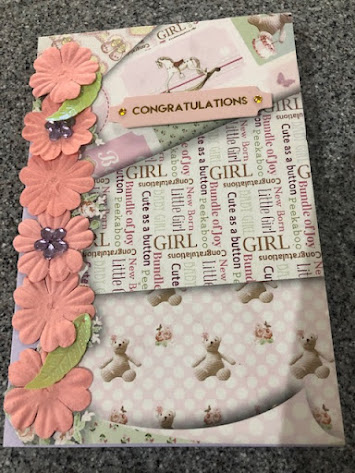 Sometimes I feel like a Womble (there’s a sentence I never thought I’d write) – making good use of the things that I find, things that the everyday folk leave behind. (Is it strange that I remember those lyrics despite not having seen the television show for over 30 years?). When it comes to card making, I like to use every last scrap, as some things seem too good to waste.

Take the It’s a Girl paper pad by First Edition – I received this as a gift along with some other card making goodies from my husband not long after our daughter was born. The front cover had come detached from the pad but it was too nice to throw away – so even though I had plenty of paper left in the pack itself, I decided to use the cover to make this card.

I liked how the cover had overlapping designs – intended to show the range of papers inside the pack. I used it to cover a small blank card but it didn’t quite cover the whole card, as I’d had to cut around the wording saying ‘12x12 paper pad’ or something along those lines. To cover the gap I stuck a line of paper flowers down the edge of the card, and added a couple of gem and leaf embellishments to give it a bit of a three-dimensional lift. Finally I added a nice pastel pink ‘congratulations’ banner from another sticker pack, as this is intended for a couple who are expecting their third child – a girl.