Socially distanced lunch with toddlers at the Greyhound, Carshalton 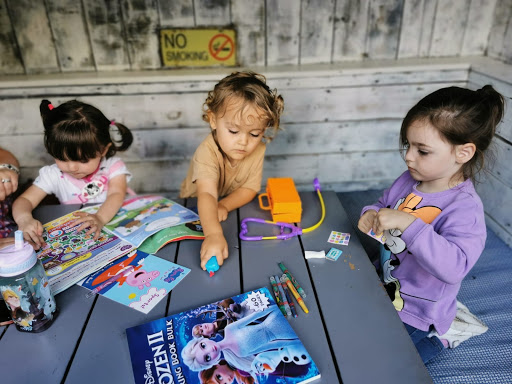 The last time I took my daughter out to a restaurant for a meal was at a Harvester last November for her cousin’s birthday. S wouldn’t sit still for more than five minutes, so members of my family took it in turns to occupy and accompany her as she explored the pub, which already had its Christmas decorations up.

So with lockdown and the continued need for social distancing it’s perhaps not surprising that I wasn’t in a hurry to take my daughter to a restaurant again. But my local mum friends - who have become a fantastic support network and good buddies since we met at baby massage two years ago - suggested meeting up in the park and then having lunch at the Young’s pub across the road and I didn’t want to say no and miss out.

I’ve reviewed the Greyhound in Carshalton before (see here) but hadn’t eaten there in a few years. This time I didn’t even set foot inside the pub - it was a lovely day and we sat in the courtyard area.

The pub is near a busy road so not ideal for small children to run around as the courtyard isn’t fully enclosed, and it doesn’t have a play area of any kind - but the outdoor booths are particularly good if you can get one of those.

At the moment due to COVID-19 the pub is asking you to pre-book, which worked really well as we were able to book one of the booths. They have comfortable padded bench seating enclosed on three sides by walls, with a roof over the top, and a nice big table that we could easily get six of us - three adults and three toddlers - around while maintaining social distancing (for the adults at least).

Tips for entertaining children during a meal out

My best tip for keeping children to sit still while you have a meal is pretty obvious - take things to occupy them! We had a selection of books, sticker books, a puzzle and two kids’ Kindle Fire tablets. They kept the other two children absorbed for the duration of the meal - and my daughter for about half the time after which point I was having to accompany her around the courtyard as she explored. But that was better than the last time we had a meal out!

How is the food and the service at the Greyhound, Carshalton? 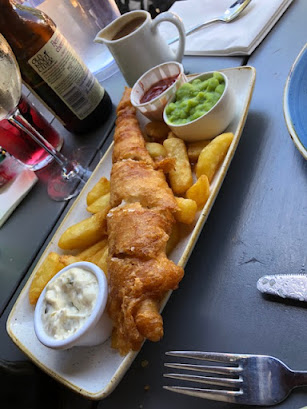 Service is very quick at The Greyhound the moment which helps when you are eating out with children. You can download the Young’s app and use that to order and pay, so no waiting around for a server to come and take your order. I wonder if social distancing also means they have fewer customers to serve, but the courtyard outside was almost full and I didn’t see inside.

There isn’t much of a children’s menu unfortunately and the portion sizes are much more the sort of thing an older child would eat - I could have ordered just a side order of fries for my 2.5 year old but I wanted her to have more of a proper meal. The choices on the children’s menu were a burger, sausage and mash or fish and chips - I went for the latter thinking it would be easiest for her to eat. 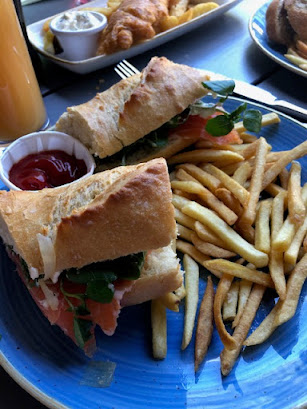 The fish was a fairly sizeable portion in batter, served with chunky chips, a pot of mushy peas and tartare sauce. The food was extremely hot - the chips were much hotter than the French fries that came with my smoked salmon and cream cheese baguette, I expect because they had been in a deep fat fryer. So S ended up having my French fries - and unfortunately didn’t want any of the fish at all so most of that was wasted, though I did eat a bit of it myself. My sandwich was very good and having something cold that I could eat with one hand was also a bonus!

The food wasn’t cheap especially as the child’s portion was quite big, but the food was good, I liked the booth we were seated in and it was really good to be able to catch up with my friends for the first time since before lockdown.