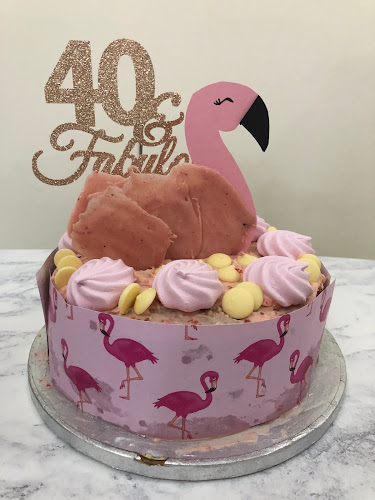 I celebrated my birthday during lockdown this year and it wasn’t too bad at all - I’m at home with my husband and two year old daughter who makes every day special. I had some nice presents, including an Instant Pot which I will blog about once I’ve used it a bit more, enjoyed a takeaway lunch from a nearby cafe and a takeaway dinner from a local Italian. My husband and I both took the day off work as well and it was nice not juggling working from home and looking after a toddler for the first time in a while!

This year my birthday cake was a chocolate cake from the supermarket - the first time in many years I haven’t made my own. But I had no free time before the big day and didn’t really want to spend hours in the kitchen on my birthday so was happy enough with a shop-bought cake.

But I’ve realised that I never actually shared the cake I made for my birthday last year, so here it is! It was a milestone birthday so I had an extended celebration, including a visit to my family, a weekend in a hotel with my husband and daughter followed by a weekend back in my home town with my school friends where we had a professional photoshoot, did an escape room and went out for dinner.

I made a cake to take with me as we were staying at a friend’s parents house while her parents were out of town (it’s like we were 16 again!). I settled quite quickly on a flamingo theme - I prefer llamas but I thought flamingos might make for a more glamorous cake!

One of my friends I was getting together with is vegan so I looked online for a suitable cake recipe and used this one from One Green Planet:

It was really moist and delicious and the perfect cake. 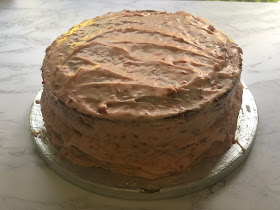 Here’s how to decorate a flamingo cake:

To start with I covered the cake with buttercream but realised the sides were quite messy (I never understand how people get perfectly neat sides!). So partly to hide it, and partly for a fun nostalgic throw-back, I added a cake banner, if that is the correct term. We had one made of foil as a child that was put on every birthday cake for me and my sister year after year, and carefully cleaned and put away again – I can remember exactly what it looks like. I had some flamingo print wrapping paper which I used to the same effect, but of course as it’s paper it can’t really be cleaned and reused!

For the top of the cake I knew I wanted the centrepiece to be a flamingo. You can make one from flower paste or even a fat 3D one from fondant, but as I was in a bit of a hurry I decided to cut a flamingo shape out of cardboard. I did however make the wings, by melting white chocolate and adding a little pink food colouring. I placed a piece of greaseproof paper on a board and using a silicon brush, created the wings by sweeping the melted chocolate in the shape I wanted and leaving them to set. I did a few layers so the wings would be thick enough to pick up when they had dried, and I was able to stand them on the top of the cake to represent the flamingo’s wings just as I wanted.

For the final decorative touches I added mini meringues – again you can make your own and if you want this whole cake to be vegan (which makes sense given the recipe is vegan!) you can actually make vegan meringue. Did you know that? It’s actually quite surprising given meringue is usually made with eggs – you can make a very good substitute meringue from aquafaba, which is the liquid you get in a tin of chickpeas!

I also used some white chocolate buttons (which were vegan) to fill in a few spaces on the top. I was quite pleased with this cake as it delivered a lot of bang for its buck – it looked fairly impressive but didn’t take a huge amount of time to make or decorate and tasted delicious, so I’m glad I’ve been able to share it with you at last! 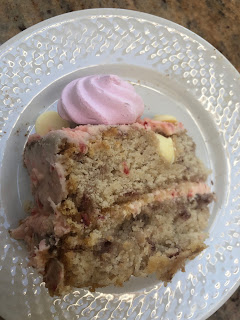