Eating out takes on a whole new dimension when there are young children in the equation. I know some parents firmly believe their child should eat what they eat, and there’s no need to go to ‘child friendly’ restaurants with kids menus. I agree that I want my daughter to be encouraged to eat more than fishfingers and chips when we go out, but it’s helpful when smaller portions are offered. At any rate, she’s only 15 months old at the moment, so a lot of food ends up on the floor, and she’s good at what I call finger foods, but can’t use cutlery yet – which does limit what we can order for her unless we want a total mess! 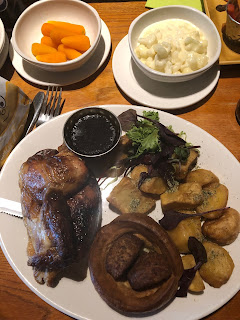 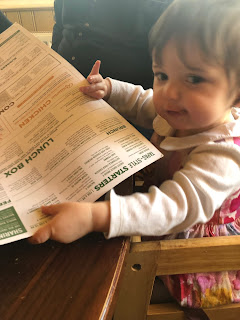 We’ve been to the Harvester twice in recent months, both times with my family to the one at Old Castle near Salisbury. It’s easy, good value, has enough parking (we came in three cars) and has plenty on the menu for everyone.


My daughter has an egg allergy and when I mentioned it to our friendly server, he made a note on his handheld device and told me they have buttons to press for each of the 14 most common allergens (I can’t even think of 14!) and can enter others manually – it’s good to know they have a system like that in place. Meals at the Harvester start with a free trip to the salad bar, which always sounds more exciting than it is – there are about a dozen salad elements to choose from, including small bread rolls, with the standard lettuce, cucumber, tomato, potato salad options – but weirdly also pineapple.
There’s no protein though – no meat or cheese – so the first time we went when my daughter had just turned one, we got her a selection of food from the salad bar and gave her some extra bits and pieces we had bought with us. This time around she got her own little meal from the children’s section (and some bits from the salad bar to eat while we were waiting) which she devoured with gusto! 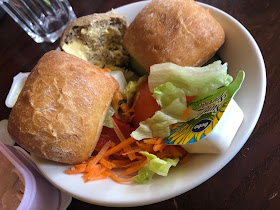 The kids’ menu is divided into sections of smaller meals for under 5s, and larger meals for under 7s, where you build your own from a choice of mains, veg and sides. She had some grilled chicken strips with sweet potato fries and a little pot of fresh vegetable sticks, which was supposed to contain batons of peppers, cucumber and carrots, but only had one tiny sliver of cucumber among the peppers and carrots – luckily S had already had plenty of cucumber from the salad bar as it’s one of her favourites. She’s eaten sweet potato before but never sweet potato fries, and seemed to really like them, though it was the chicken she went for straight away. I love watching her eat, it’s so cute!


My husband had his usual burger – he orders a burger about 90% of the time when we go out, and the other 10% of the time it’s steak – and I really fancied a roast dinner, even though it was a very sunny day, as it was a Sunday and I hadn’t had one in ages. I decided to pay an extra £1 to get a larger portion of roast potatoes as they are my favourite part of a roast, but they were quite disappointing – small and crispy and very different to how I make roast potatoes. My chicken was beautifully moist and the Yorkshire pudding not bad at all – the cauliflower cheese was a bit of a let down though and was more like boiled cauliflower with a thin cheese sauce poured over the top, than a dish I would consider a proper cauliflower cheese. Overall though it wasn’t a bad meal at all and good value at just over £10 for the amount of food and the quality of the chicken. 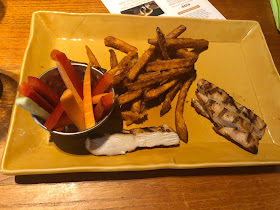 Soft drinks are on a serve yourself free refills basis and they have one of those machines where you can select your base drink e.g Pepsi or lemonade (they also have non carbonated juice drink options) and then if you want you can add a flavour like strawberry or vanilla. It’s fun to experiment but I imagine this wastes a fair amount of drink - the person in front of me poured herself a glass of something, tried it and decided she wanted something else so poured it down the drain. On the other hand it’s possible to pour a small amount of a drink to try it then get something else - though I think free refills do encourage people to drink more carbonated drinks than they might otherwise!

We never have room for a dessert after a meal at the Harvester which is a shame as we saw a sundae go past that was absolutely massive and looked very tempting!

It’s worth downloading the Harvester app as they have special offers - when we went there was a deal to get a child’s meal for £1 per adult paying full price so with two children we saved £6.

I do quite like the Harvester - the salad bar could do with a bit more oomph but there’s a big menu with something for everyone, it’s good value and has a nice family friendly atmosphere. While it’s nothing fancy, that suits my family and I expect we will be back.