Why Iberian ham deserves a place on the British dining table 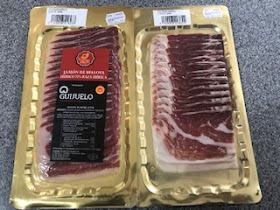 How much do you know about Iberian ham? I have to admit I was a little hazy - I knew it from restaurants and deli counters as a wafer thin type of cured ham from Spain but that was about it.

In fact it's the pigs that are Iberian. They have dark skin and look black rather than pink, with long slender hind legs. They live in freedom and graze on acorns in certain parts of Spain, which apparently gives the meat a unique taste.

It's quite interesting reading about the process to produce the ham from salting to washing, then the pieces are left for up to three month for the salt to permeate. The really unique bit is the way the hams are cured - hung up and exposed to the natural climate conditions for 18-24 months and after that aged in a cellar for at least another 12 months (usually 18). The secret of curing is passed down in families from generation to generation.

It's also part of the famed Mediterranean diet - Iberian ham is high in monounsaturated fatty acids, protein, zinc and vitamins B1, B3 and B12, according to the information leaflet I received.

I was sent some Iberian ham by Ibeham, a project promoted by the Denomination of Origin Guijuelo (Spain). There are plenty of recipes on their site suggesting how to enjoy the ham but I wanted something fairly pure and simple, so tried it on a piece of fresh bread with some mozzarella and a little olive oil.

The slices are so wafer thin they are almost transparent, separated in the packet by pieces of plastic so you can peel the ham off. Each slice has a ribbon of fat which dissolved on the tongue and the taste and texture were both top notch. There are a lot of recipes you can use this in but I just want to savour the flavour by itself!

If you can get hold of some proper Iberian ham - and you don't have to go to specialist shops, Waitrose has some - then I highly recommend it as a little bit of luxury if you're just having a sandwich, or a platter for guests if you are entertaining. 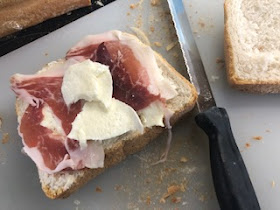 Thanks to Ibeham for the ham to review