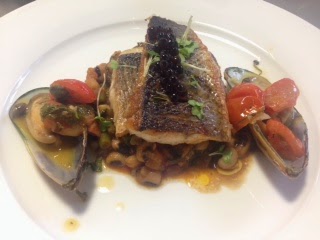 A little while ago I ordered a whole fish from the supermarket online, thinking how much I enjoy eating fish in restaurants, when it is served lightly poached or grilled, with the head still on and the backbone still in place. I'd forgotten of course that the fish is still prepared - scaled, gutted and the innards removed. So when my fish turned up from the supermarket fully intact I had no idea what to do. I gingerly stuck a knife in its stomach, realised I had no idea what I was doing or if any blood and guts were about to start spilling out, and with a shudder threw the fish in the bin! 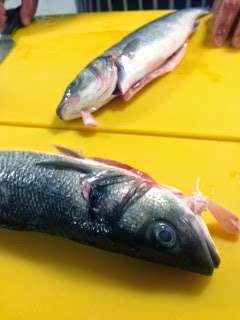 So when I came across a new cookery school in London called Jenius Social and saw that they were offering a class on how to prepare, fillet and cook fish, I knew I had to do it.
I booked fairly last minute, only a couple of days before the class, and was surprised but very pleased when I arrived at their Islington base after work to find that I was the only person booked in for that evening - so I was getting a private lesson!

The chef, Michael, stood opposite me showing me what to do step by step. The room is arranged as a classroom with several work benches and the cooker and hob at the front, so if you were in a group lesson it would be easy to see what the chef is doing and then copy. But I had the benefit of one-on-one attention and was working right opposite Michael so if I was ever unsure he could show me exactly what to do, and help if necessary. 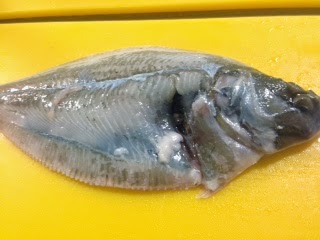 We began with a sea bass and I learnt how to fillet this or any other kind of 'round' fish. It's hard to explain without pictures and I couldn't take many photos as my hands were too fishy! It turns out that when I stuck my knife into my supermarket sea bass's belly, I was completely wrong from the start. You actually begin with the backbone, and always have the fish facing away from you. You need to really grasp the fish with a strong grip so there is no time to be squeamish! Using a small sharp knife, make a slit all the way along the backbone, then make a diagonal cut as if you were going to remove the head, but without cutting right through, and the same just above the tail. Remove the fins along the side. 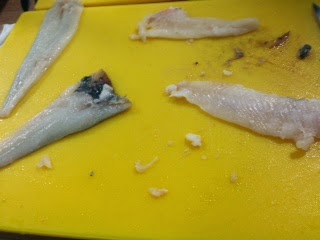 Trim the edges if you have any bits that don't look nice and then use the knife to gently mark down either side of the bone that remains in the fillet. Use a pair of fish tweezers to remove any small bones which remain - there will be three or four near the top of the fillet, running down the middle. And that's pretty much it!

Next we went onto plaice and learnt how to fillet a flat fish and remove the skin. The difference this time is that when you lay the fish on its side, there is a bone running down the middle of each side. You remove the fillets using a similar technique, starting by running your knife along each side of the bone and easing it under the flesh to remove each fillet, but unlike the sea bass where you end up with two fillets, this time you end up with four.
To remove the skin, make a small cut in the end of one fillet so you don't go all the way through, but have a flap to get your knife under. Hold the fillet firmly at the end, and slide the knife under the skin and all the way up.


Michael gave me a lot of tips about buying, storing and cooking fish; for instance to tell if a fish is fresh, look at the eyes (they should still gleam), smell it (it should smell like the sea rather than fishy) and prod it (the flesh should spring back easily and not leave an indent from your finger). Store on the bottom shelf of the fridge and cook fresh fish within a day of buying it. 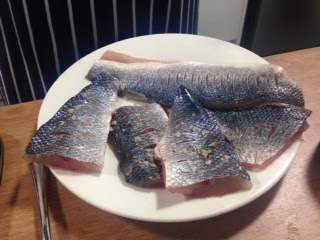 The sea bass was going to be seasoned and pan fried whereas the plaice was stuffed with crab meat, rolled up and oven cooked. Michael had also par-boiled some potatoes which were thickly sliced and seasoned and fried in a pan of hot oil. The accompaniment to the sea bass was a sort of bean casserole using black-eyes beans, tomato and chorizo among other things; this cooked down quite quickly in a saucepan.

Finally came the part I had been dreading - squid. I hate squid, and have eaten calamari when I was younger - as I didn't know what it was - and didn't like it much. But I can barely look at squid. It was very funny when Michael plonked one on my chopping board and told me to cut it in half; I squealed and recoiled which he found very amusing! I decided to be brave and chop it in half then tried not to look as Michael threw it straight into the pan.

It doesn't take long at all to cook the fish so a few minutes later it was all ready and Michael showed me how to plate up in a sophisticated manner. We used a crumpet ring to keep the bean casserole in a circle in the centre of the plate and placed the fish on top and drizzled some oil over the top. Each final dish looked very attractive and tasted great - though I have to admit I didn't eat the squid! I tried a tiny bit and it was just as rubbery and unpleasant as I remembered, which no amount of good cooking techniques could change!

The course cost £60 for only two hours, but given the amount of fresh fish that I was using, that actually seems quite reasonable. The fact that the class went ahead even though nobody else had booked for that evening and I got a one-on-one lesson was even better! 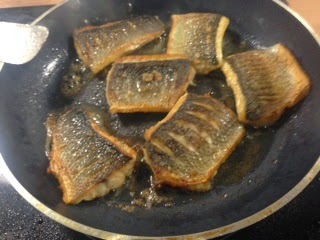 Jenius Social is a new enterprise and has only been going for two months or so; I heartily recommend their courses and am keen to do another!

Here are the finished dishes I made: